I recently had the opportunity to take photos of my niece Chelsey. They were "senior photos" of sorts. She was graduating from college and her parents wanted to capture Chelsey and her twin brother Frank before they "flew the coop". As a parent myself, I know this will be both a happy and melancholy time.

Chelsey knew exactly where she wanted her photos taken. At the Target Field in downtown Minneapolis. Not just in the stadium during a game. Rather, on the field, in the dugout and on the players' steps.

This story goes back many years for Chelsey. She has always loved baseball. Being a twin, she and Frank played ball together from a young age. Chelsey played on the boys teams until high school when she had to switch. She not only held her own...she was very good! She continued to play in college and she volunteered as often as she could for baseball organizations including the Minnesota Twins. This Spring, Chelsey was offered an internship with the Minnesota Twins (she does fun things like create the questions about the ball players that display on the screens and operate the Fan Cam video camera). It was because of her internship that she was given permission to use the stadium for her on-location shoot.

Not only was it an opportunity of a lifetime for me, it was a reminder that location is critical to taking great photos. Locations that hold special meaning bring out genuine happiness and familiarity. If you have a portrait session coming up, think about locations that are important to you. Some other on-location shoots that I've enjoyed, because they've held special meaning to others, include Afton Apple Orchard, Lake Elmo Park Reserve and Lake Elmo Airport. Be creative. Game on! 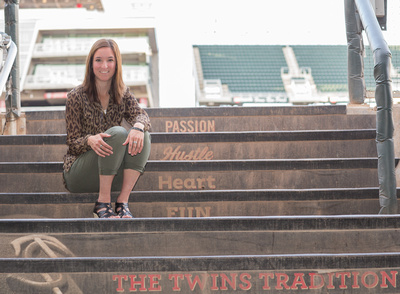 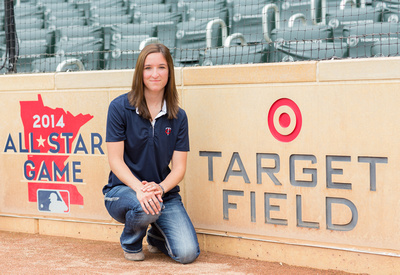